As we drove at sunset down the steep mountain road back to the train station down in the Valais, windows open to the crisp air, the aroma of freshly harvested Lemon Verbena wafting through the cabin, my brain was buzzing with ideas provoked by my hours with Hans-Peter. He is a fine educator, and being around him cannot help but sharpen the senses. Rocks tormented by plate tectonics, savory herbs mingling with conspicuous California poppies, the ever-present hovering of insects, tall stands of grasses rustled by birds, everywhere I looked there were signs not only of hard work but also of the wonderment this grand science experiment has brought into being.

I have always believed in the lyrical beauty of select sciences, certainly of Geology and Biology. I mean, the very idea that rocks can fold, that mountains can be turned upside down or eroded away altogether; or that a pest like the Drosophila suzukii can potentially be defeated by beneficial, though equally selfish insects and spiders, are expressive stanzas the earth writes. And Hans-Peter’s Mythopia is a poetic achievement.

Several years ago, when researching the relation between the composition of various vineyard soils and terroir expression, I happened upon the concept of biochar. Simply put, biochar is charcoal put to a biological use, in connection with my discovery, as a soil amendment. The use of it has a long history, research strongly supports, dating back to pre-Columbian Amazonians. All of us are by now familiar with the irreversible loss of vast tracts of the Brazilian Rain Forest due not only to the irresponsible and often illegal harvesting of hardwoods but also to the agricultural needs of 1000’s of subsistence farmers. The trouble is that the biodiversity of life of the rain forest is nurtured in the canopy while the soils are poor. A few crop harvests from a plot is all you get before the soil’s nutrients are exhausted. The pre-Columbians knew this and so hit upon biochar as a solution: the so-called Terra Preta soils they left behind more than a 1000 years ago.And while doing additional research into biochar, I came upon Hans-Peter Schmidt, the first winegrower in Europe, if not the world, to have begun experimentation with biochar in his Domaine Mythopia vineyards located in the Valais region of Switzerland. You may read here of my initial encounter with the gentleman back in 2009 coupled with thorough explanation of biochar and terra preta.

As fortune would have it, I was to attend this year’s Digital Wine Communication Conference (DWCC) in Montreux, Switzerland where Hans-Peter had been tapped as a possible guest speaker, a perfect fit, in my view. Though his role had been greatly diminished by the time the DWCC began (an opportunity squandered), I was nevertheless able to meet with him and arrange a visit to Mythopia, his ethereal domaine. As he writes of his work:

Facing the highest summits of the Alps, the steep slopes of the Mythopia vineyard have become a paradise, home to fragrant flowers, fruit trees, rare birds and more than 60 species of butterflies. It’s a vineyard exuding biodiversity where the ecosystem is sustained by a symbiotic network of uncountable species. The vineyard is no longer a hostile monoculture with naked soil but a beautiful natural system designed to produce grapes expressing the subtleties of its terroir. The soil is activated by accompanying plants and the air is full of the music of bumblebees and the perfume of wild blossoms.

In 2009 the Mythopia vineyard assumed the role of the research centre for the Ithaka Foundation and its Institute for Carbon Intelligence. Bridging the gap between theory and practice, methods and strategies have been developed for an ecological and economically sustainable viniculture. In addition the vineyard plays a major role in researching agricultural methods having a positive influence on the climate and biodiversity.

The grapes we harvest in Mythopia prosper without the interference of oenological products. Our wines are made from grapes and air, nothing more.

After a robust hike up Mythopia’s vineyard slopes, the equal to his website’s lyricism, we sat down for a conversation at a favorite spot, one where Hans-Peter often hosts tastings. I was quite happy to learn that my posts from early in 2009 had actually brought visitors to Mythopia. Indeed, I was also pleased to learn that no less a winegrower than Randall Grahm had taken an early interest in biochar and had actually purchased a few tons from Hans-Peter who duly shipped them to California. Our talk improved from there… 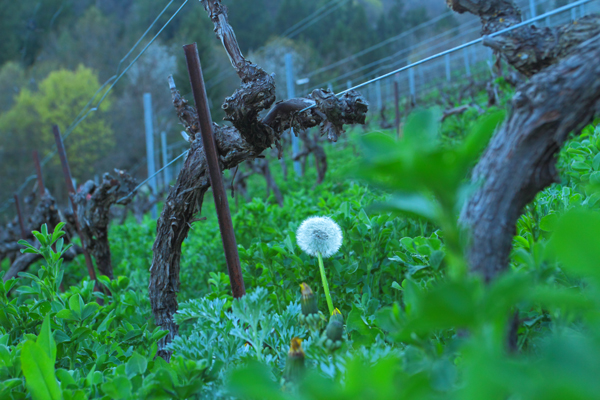 Ken Payton: So where exactly are we?

Hans-Peter Schmidt: We are somewhere in the middle of nowhere in the Alpine Mountains. Geologically it is a very interesting place because just to the south is the African Plate, and we are, of course, on the European Plate. The result is severe folding here which in practical terms means we have a terroir here which can change from 10 meters to 10 meters. Here we have a river between, one the one side of which we have calcareous rock and on the other, schist. And it [Mythopia’s vineyards] makes it a difficult place to do science because the variation is so immense. On the other hand it is a great place to make observations and to try things and to discover.

KP: How did you find this place and what has made you stay?

HPS: My wife and I found it quite by accident. When we first came here it was all naked soil. Intensive production – 900 hectoliters per hectare -, heavy herbicide and pesticide use put the question to us: Can a vineyard be an ecosystem and have a high biodiversity? Could a vineyard ecosystem be compared to a natural reserve in a certain way? After all, why should the place where we produce our food – that which gives us life – why should that be in a toxic environment and not in a natural environment we would otherwise like to preserve? At this point in our reflection, we started to plant trees between the vines and we seeded a high-biodiversity green cover, with legumes for fertilizing and a lot of herbal species; we placed around many piles of stones and bee hives… in fact we put up everything we could think of to make it more diverse, more inviting to plant and animal species. We were hoping to attract life from our surroundings, an area still rather intact here. We have the highest vineyard in the region and we are near forest and pasture. Even after only one year we discovered many new species entering the area. And we haven’t stopped for the last 8 years! Every year we find new species, mostly butterflies because you can so easily see them with the naked eye; but also new birds and mammals. And when we’ve done microscopic images we saw a higher biodiversity in the microbial life of our soils but also on the leaves and of yeast populations on the grapes.

This brought us to the aspect of quality. What effect will this high biodiversity (which is an aim in itself) also have on wine quality? In the end that might convince others to do what we have done here. So the final objectives here were to make high quality wines and maybe to discover in what sense these wines are different. We had to, therefore, make them natural wines in a certain way, which means we only keep for the wines what we bring from the vineyard. We will not add anything. Others may do that and it may improve their wine in their sense, but for us it was important to see what impact does biodiversity have on the wine: on quality itself on the fermentation and stability of the wine. 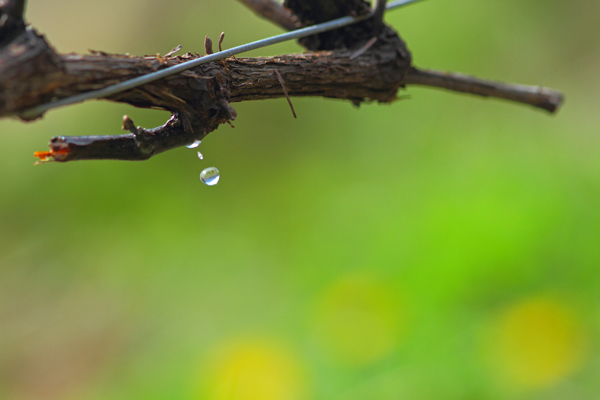 From the beginning we made what is now called ‘natural’ wine, with no technical interference, no filtration, no additives, mostly gravitation, using the stems in maceration, doing long macerations, passing by the press… these are the choices we’ve made. Mythopia is essentially an ecosystem research project that has to translate into wine quality somehow in the end. But here we want to learn elements that we can transfer to other vineyards. That does not mean we will transfer all we do here to somewhere else; but we hope to learn certain elements that we can propose to other winegrowers so as to help them improve both wine quality and the ecosystem overall.

KP: So you use nothing in the vineyard?

HPS: Well, when the pressure of mildew becomes too high we have to use some organic sulphur and copper. This year, for example, we used 250 grams of copper. Even in organic farming you are permitted to use 3 to 6 kilograms of copper depending on the year, so 250 grams is rather low. Sure, we would like to live without but we will not go so far as to risk losing our yield. We have to see the plant health to the end of the season with a fairly decent yield. And we go into the late season for we have vineyards going up to 870 meters. We need the cold Autumn nights with warm to hot mid-days which really makes the aromatic pump in the wines and it improves the yeast diversity on the stems and on the skins while still keeping the acidity in the wine.

KP: On our walk up here you mentioned in passing that the region was hit by Drosophila suzukii. My ears perked up because I was the first to report, back in the summer of 2009, on the pest’s appearance, specifically in berry farms in the Watsonville, California area. At that time it was not known whether the fruit fly could puncture the skins of grapes. Well, months later we had confirmation from Oregon from winegrowers that, indeed, the fruit fly could damage grapes. So tell me of your observations of Drosophila suzikii’s behavior here and how, despite the absence of natural predators, the fly might be beaten back or at least contained.

HPS: Yes, we observed this year that the Drosophila suzukii came here, in this region, for the first time massively. Last year was minor in comparison. We observed that they pierced the grape and laid their eggs inside. At this moment the grape skin was open. But other insects followed. We observed a lot of spiders, also wasps, bees, and wild bees, and others. They all profited from the ruptured grape skin by consuming the sugar, and some insect or spider seems to have fed on the Drosophila eggs. It could also be that as the grape was emptied of sugar that the Drosophila could no longer hatch. So in this region we experienced great loss due to Drosophila. Yet it is also logical, from an ecosystem point of view, that in an area of great biodiversity no single insect can become a massive problem. I think we can do additional research in this field, make a project out of it. 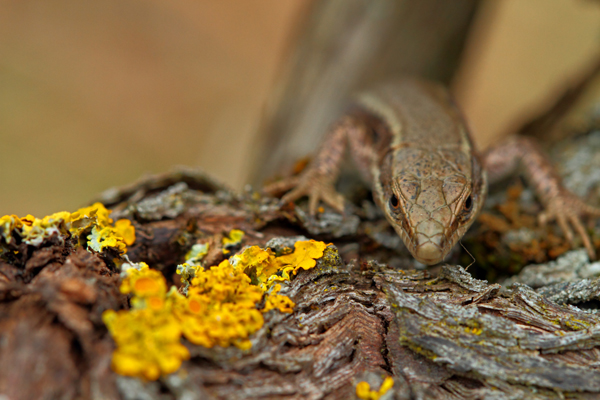